HorseTourneys cash-game players probably wish Sunday were more of a “day of rest” for Ed Peters. Just seven days after winning $3,750 for leading the way in our $7,500 guaranteed game on July 3, Peters cashed for $12,500 by posting the top score in yesterday’s $25,000 guaranteed game. The July 10 competition utilized our popular All-Optional Live format, which allows players to choose their 10 plays from among 20 eligible races. Peters used the strategy well, saving his last bullet for the final race of the contest (race 6 at SA). He deployed that pick on a horse that could have left him vulnerable to would-be leapfroggers. In the end, it didn’t matter…Peters had a large enough lead going in to that race that the 2-1 co-faves were both essentially “running for him” and one of them won, thereby sealing the deal on the second consecutive Sunday win.

On Saturday, July 9, we had a $7,500 game that Bill Ulrich captured after winning the last race. Clearly not the same player on Saturdays, Ed Peters was out of the money in this one! 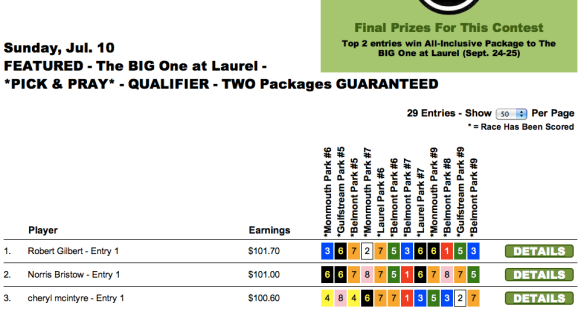 The field for September’s The Big One grew by two on Sunday after Robert Gilbert and Norris Bristow garnered the top spots in our 2-seat guaranteed tourney. Gilbert and Bristow were like the lone speeds in a paceless race. They opened up a nice lead midway through the contest, while staying within a couple of bucks each other most of the time. Then they tired a bit turning for home, but had enough left to hold off all of the late closers. We’ll be giving away two more coveted seats to The Big One next Sunday.

All weekend long, HorseTourneys was busy sending its smart players to exciting tournaments from Coast to Coast and in between — to place likes Monmouth, Wynn, Gold Coast, Del Mar and Hawthorne. And Sunday marked our first time sending players to Saratoga where the “Battle of Saratoga” this year will be made up of two separate one-day competitions. HorseTourneys players responded to the Saratoga qualifier (and their preceding feeders) in big numbers last week, thereby allowing us to award no fewer than six full, 2-day packages to the August 10-11 events, plus an extra $750 for travel. Congratulations to winners Phil Lam, Dennis Dougherty, Cheryl McIntyre, William Payseno, Charlie Ricks and Randy Bauer. We’d love it if we had another six berths (or even more!) up for grabs this Sunday. Feeders run all week long.

Have a winning week.