When you have as many as 28 featured tourneys in a five-day period, one of the fun by-products of that is that the door is opened wider for some interesting, out-of-the-ordinary results. We seemed to have more than our usual share of that last week.

Our very first marquee event of the week, Wednesday’s $2,000 Guaranteed cash game finished with a tie between Robert Ricci and 2018 NHC Champ Chris Littlemore. They each had 4 winners…and Littlemore had more places (2) than Ricci (none). However our first tiebreaker is number of winners and our second is highest-priced winner. Ricci won that tiebreaker $27.30-$13.40 and so the top prize of $1,831 was his. Littlemore had to settle for $732 in a game ultimately worth $3,663. Don’t get down on yourself, Chris. I’m sure you’ll win a big one someday!

Wednesday began our final stretch of qualifying for the Kentucky Downs Turf Handicapping Challenge at Xpressbet.

Ronald Peltz, Dennis Decauwer, Turner West, Brett Wiener and Jon Petoskey were the day’s five winners of $1,600 in entry fees for the two days of contests that now begin (as a result of Sunday’s Kentucky Downs cancellation) on Tuesday September 15.

The fourth-place finisher, Brett Wiener, was the first-place finisher in Wednesday’s qualifier to the Keeneland Fall BCBC/NHC Online Challenge.

Wiener blasted out of the starting gate with three straight winners at odds of 12-1, 9-2 and 2-1 and added 2 places thereafter to win in wire-to-wire fashion. He receives a $3,000 ticket into the October 10 cyber confab at Xpressbet.

Unless your memory is even worse than mine, you will recall that Brett Wiener won seats on Wednesday to both the Kentucky Downs and Keeneland contests. On Friday he put the finishing touches on what might be fodder for a new sitcom about contest play: “Two and a Half Wins”

Pete Acocella led the way in Friday’s Flo-Cal Faceoff qualifier, which offered $1,500 entries to the top two scorers. Behind Acocella were the tandem of Frank “High Five” Aylward and Wiener. Unlike the case with the Ricci-Littlemore tie, I can’t give you any riveting description of the tie-breaking process in this instance…because there wasn’t any. Aylward and Wiener just had one collection with the same winning horse. There’s no good way to break a tie like that, and so Aylward and Wiener each received a $750 credit into their HorseTourneys account. And THAT’s how Wiener wound up with “Two and a Half Wins” this week.

For the week, Pete Acocella actually outdid Wiener by half a win. In addition to his victory in the Flo-Cal play-in, he was one of four on Friday—along with George Brown, Rhonda Graziano and Rich Nilsen—to win Kentucky Downs seats. 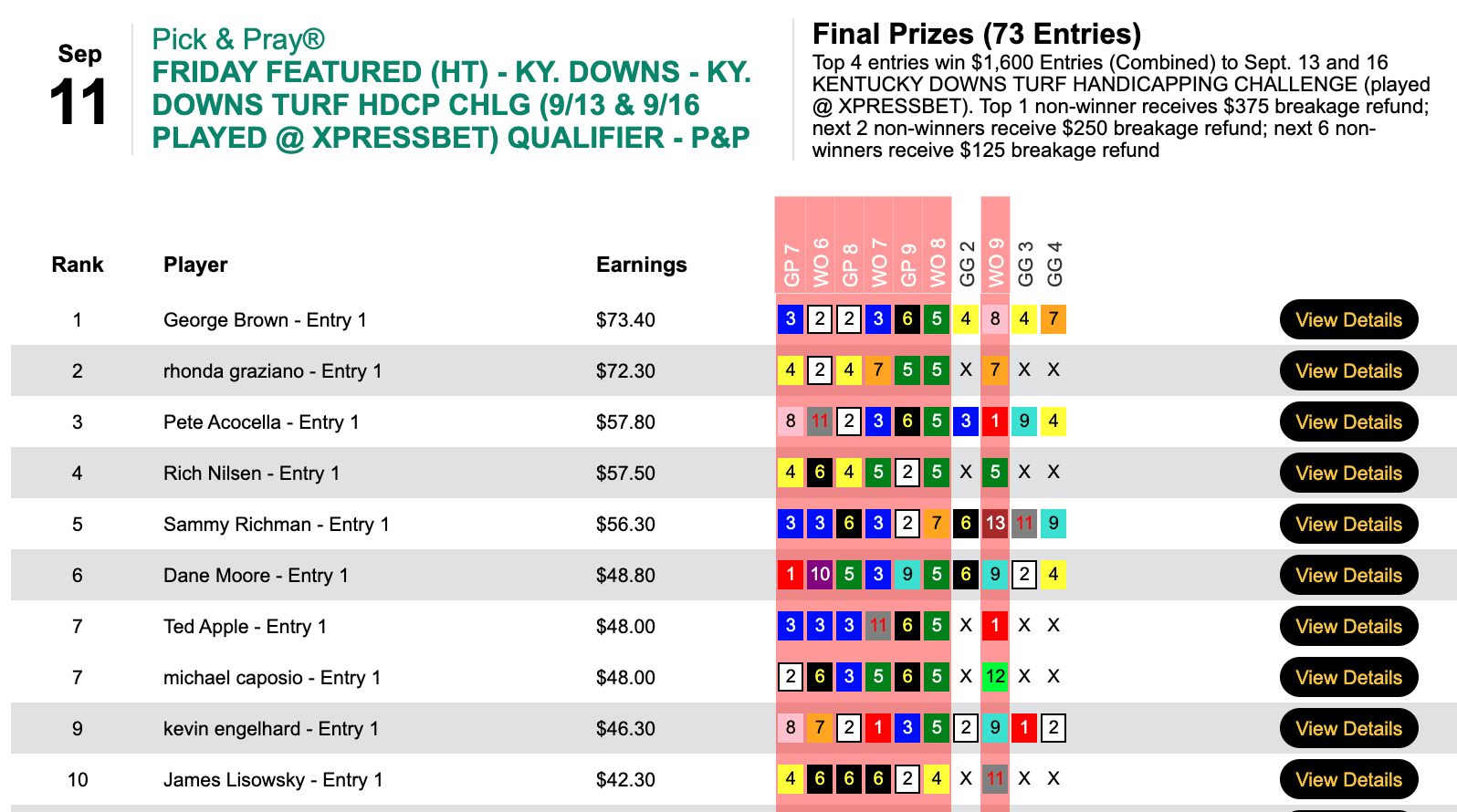 And that same score—$57.80—also got Acocella home first in Friday’s Keeneland qualifier.

Acocella’s big day came via three runner up finishes that were followed by his lone winner of the day—Marwoods War ($32.20, $9.80) in the 8th at Woodbine. (Marwoods War wound up being the first of several Woodbine longshots that swung tourneys during the week.)

That one plus four other winners and one place landed McMurdy a place in The BIG One this coming Saturday and Sunday here at HorseTourneys.

(Incidentally, there are the customary seven buy-in spots available for this year’s The BIG One in case you want to play but haven’t had luck in qualifying as of yet. They are priced at $7,500 each. If you are interested, or need more information, contact McKay Smith at support@horsetourneys.com.)

We’ll hop over, at this point, to HorsePlayers, where Randy Bauer and Bruce Rossi sort of took opposite paths to victory in Friday’s $75 NHC qualifier.

Closing out the Friday action, Ken Jordan had Marwoods War among his 5 winners from 10 races. 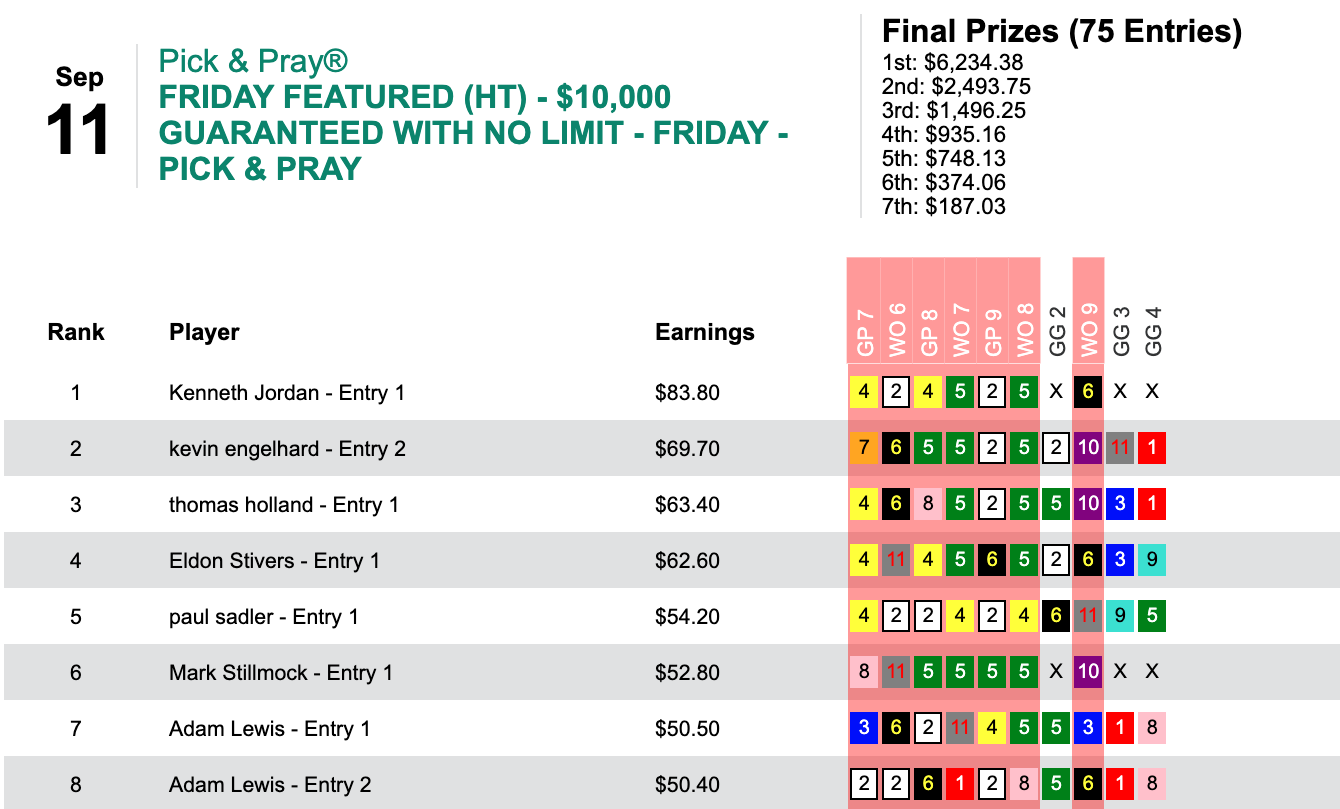 That performance got Jordan the top money of $6,234 in Friday’s $10,000 Guaranteed Pick & Pray, which closed with a purse of $12,468. Making that kind of money for picking horses is nice work if you can get it.

And Ken Jordan can get it.

Another red-hot performer these last several weeks has been Evan Trommer.

Trommer registered his seventh featured-tourney triumph in the past six weeks by hitting Guestimation ($10.30, $5,50) in the final race (Woodbine’s 13th) to close out a 4-win, 3-place day that added his name, by a margin of $3.00, to the list of no more than 57 participants in this coming weekend’s The BIG One.

Dale Hatfield was ready for a feud and came out shootin’ in Saturday’s $25,000 Guaranteed Pick & Pray. 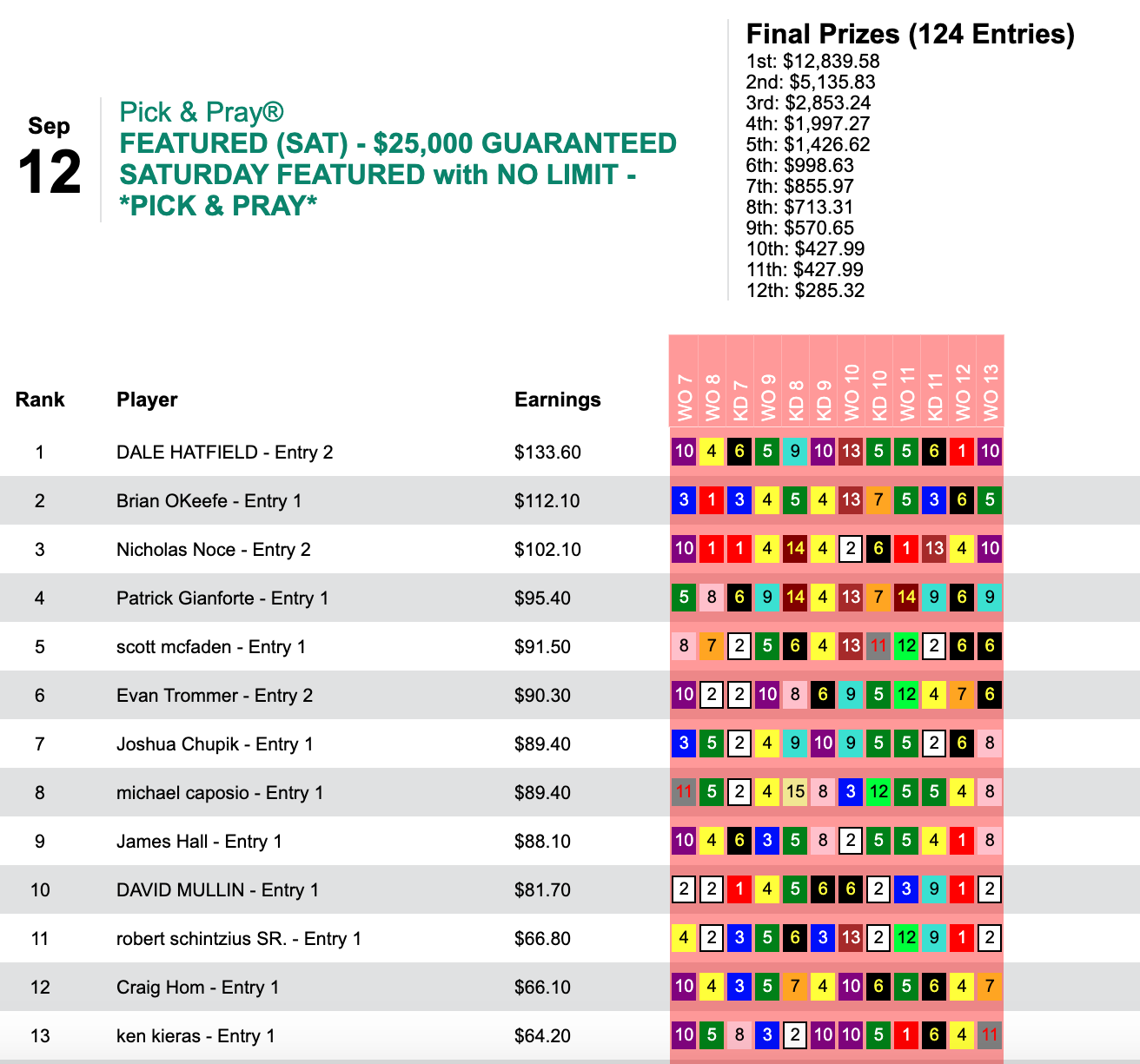 Hatfield nailed the first three races en route to a 5-win, 1-place performance that showed he was the real McCoy in this $28,552 event. Hatfield’s share of that was $12,839.

Due to the Sunday kiboshing of the Kentucky Downs card, there was only one $8 Pick 6 Jackpot tourney last week. It took place on Saturday.

The award for consistency on Saturday went to Mike McIntyre.

McIntyre registered 2 wins and 6 places in taking Saturday’s NHC “Maiden Special” at HorsePlayers. At one point, he collected in seven consecutive races.

High score of the day on Saturday belonged to Thomas F. McNamara who took the “regular” Breeders’ Cup Betting Challenge qualifier at HorsePlayers.

McNamara punched his ticket to the BCBC thanks to 4 winners, including 3 of the double-digit variety.

Traynor’s best winner out of the five that he picked came in the first contest race, the 7th at Woodbine, where he went strong to the hoop with Alicia’s Kid ($24.50, $11.10).

Remember when we mentioned that Craig Hom lost the Saturday Big Bucks game by just 90 cents to Ken Jordan? Well Hom was back with a vengeance in Sunday’s $15,000 Pick & Pray.

His 3 wins and a place took down the $7,688 grand prize by the margin of more than a capper. That’s a lot of scoring for what was a 9-race contest after the rained-out Kentucky Downs races were subtracted out. As you can see, Hom didn’t bother himself much with chalk on Sunday.

Here the margin of victory was an even greater $93.60. But second-place was important, since this was a “two-seater”, and it was Mark Stillmock who grabbed that second $1,500 Flo-Cal entry.

Stillmock also picked up a berth to The BIG One…with a score almost double that of his Flo-Cal runner up finish.

As in the Flo-Cal play-in, Stillmock’s biggest return came with 31-1 winner Faith Over Fear in the 10th at Woodbine. The difference in this live-format qualifier was that—unlike in the other game—Stillmock had another big Woodbine longshot, Ron’s Gizmo ($43.10, $17.70) in the 11th race, which was the final race of our featured tourneys.

Californian Bill Shurman is known in contest circles as a top-flight player—though not necessarily because of Exacta tourneys.

Let the record show that Shurman can do exactas too! His one-and-only hit—for a $1 payoff of $56.30 in the 11th at Monmouth—got him home first for the $700 top prize in Sunday’s $1,000 Guaranteed game, which went off with no takeout to players and at a loss to HorseTourneys.

Over at HorsePlayers, the Mendoza Line turned out to be set very high (unlike in baseball).

Both Norma Mendoza and Michael Kiatipis had Ron’s Gizmo in the final tourney race at Woodbine and that propelled them to victory in Sunday’s $165 NHC Pick & Pray.

In the other Sunday HorsePlayers feature, Max Schnepf did not have to fear not having Ron’s Gizm…because he had faith in Faith Over Fear.

That winning 31-1 shot in the 10th at Woodbine was key in Schnepf’s Low Ratio Breeders’ Cup Betting Challenge qualifier victory.

Good luck to the many HorseTourneys qualifiers who will be sweating out that final camera cut in the Kentucky Downs stretch on Tuesday and Wednesday. And thanks to all of you for what was yet another very fun weekend (even without New York and California racing here at HorseTourneys and HorsePlayers.