If you spent time with family and managed to travel to and fro safely despite some bad weather around the country, you had a pretty successful Thanksgiving weekend. If, at the same time, you managed to prosper in a handicapping contest, then you had an even more memorable weekend. Plenty of people did just that at HorseTourneys and HorsePlayers, led by G.T. Nixon. 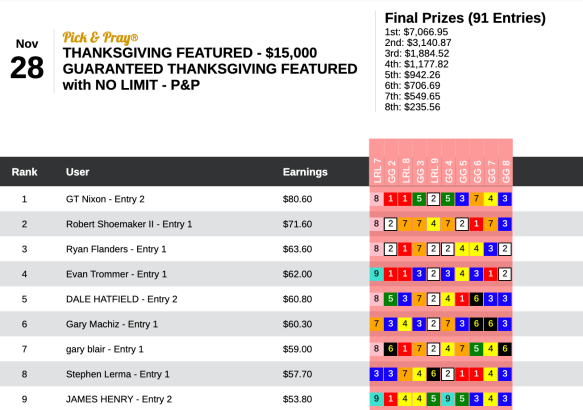 That wasn’t enough for Nixon, however. He used the same 10 picks in Thursday’s Horse Player World Series entry-only qualifier.

Unlike his Presidential namesake, G.T. resorted to no dirty tricks in order to achieve a second-term victory. As a result, Nixon will be headed to The Orleans in Las Vegas next March…rather than seclusion.

Similar to the mashed potatoes bowl at our house, the Pegasus World Cup qualifier was a popular stop on the Thanksgiving menu at HorseTourneys.

We had enough entries to award two $6,500 packages and the players who wound up giving thanks for such enthusiasm were Paul Cush and Peter Osella. Cush had five wins and a place over the first six tourney races en route to a 6-win, 2-place day. Osella got second on the strength of three firsts and another three seconds.

The Thanksgiving featured tourneys wound up being something of a Maryland-California Faceoff given that Laurel and Golden Gate were essentially the only two tracks we had at our disposal once the weatherman was done doing his thing. On February 29 and March 1, the two tracks in play will be Gulfstream and Santa Anita in the Flo-Cal Faceoff—and, like on Thanksgiving Day, Stephen Gravina will be among the contestants doing battle.

That’s because Gravina put up 4 wins and 2 places in our Flo-Cal qualifier. Unlike Paul Cush, Gravina did most of his damage at the end, coming up with two 5-1 winners and a place in the final three contest races to secure the $1,500 online entry to the $100,000 Guaranteed event.

Friday’s high scorer came in the day’s $75 NHC qualifier at HorsePlayers. It was Mathew Levy.

Levy racked up an impressive 10-race total of $172.20 to record the triumph. Running second to Levy—and also earning a low-ticket NHC seat—was no less a competitor than 2018 NHC Champ (and 2019 Final Table contestant) Chris Littlemore, who picked the winners of each of the first four races to take the lead, then added three later place collections to retain his spot “in the money”. 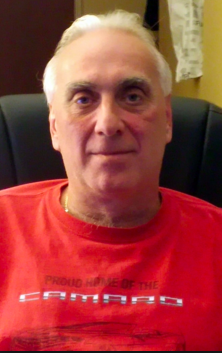 Levy’s big total came thanks to six wins and a runner up. Here’s a look at how his Friday went.

Also enjoying a Friday that was more Green than Black was “The Macho Man”, Gary Machiz.

In Friday’s other featured tourney, our Horse Player World Series entry-only qualifier, James Politano got off to a great start and continued on from there.

Politano did all his scoring (on three wins and a place) in the first six races. No one could catch him, though John Kelly came close. Kelly hit Algodonal ($10.20, $6.40) in the last race to move into second and snatch the other available $1,500 entry to the signature handicapping event at The Orleans.

Fred Speck Jr. had two winners—one of which was Dark Hedges—and added three nice runners off that paid off almost like winners, returning $21.00, $7.40 and $13.60 in the second slot. That earned him the entry/hotel/travel trifecta that was also won by runner up Jeff Sandler, who had three winners, including two in his final two plays—Next Shares ($56.40, $14.40) and Dark Hedges…both at Del Mar.

Longshots were all over the place at Del Mar on Saturday. Chris McDonald used Zuzanna ($48.00, $15.60) as the lynchpin to his day. 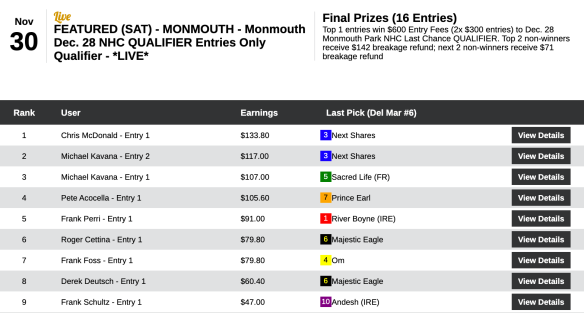 He followed Zuzanna up with Dark Hedges and the result was a victory worth two $300 entries for the December 28 Monmouth NHC qualifier.

Traci Richards had Saturday’s high score. It came in the NHC qualifier at HorsePlayers that was restricted to those without a 2020 NHC seat. 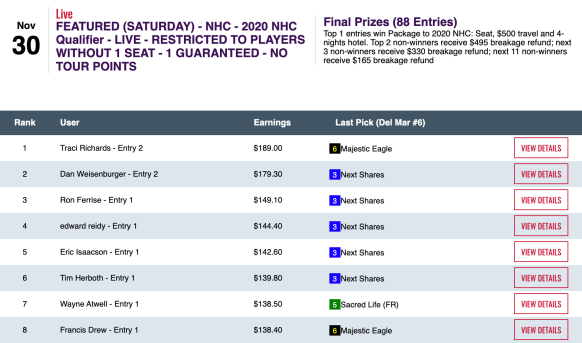 Granted she had a couple of extra plays in which to build her score (compared to those in the All Optional Live tourneys, who had just 10 plays at their disposal). However, Richards didn’t get to choose her races. So despite the Roger Maris-like asterisk, we’re giving her credit for the day’s best score! Here’s how she did it:

Richards had such a big lead in her game that only two players could catch her in the last race. Traci “played defense” by selecting one bomb that ran up the track. One of her opponents that was a threat took a 44-1 shot that lost. The other—perhaps playing the tourney as though it were a Pick & Pray—chose a 6-5 shot. The one they all missed in the race was the 22-1 winner, Next Shares.

Sunday offered 10 featured events, four of which were All Optional Live games. 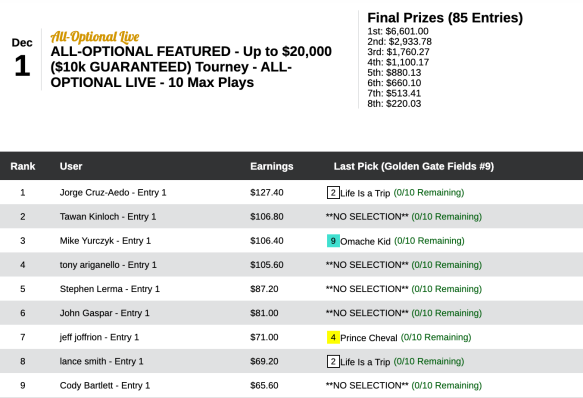 Our All-Optional Live qualifier for the Pegasus World Cup Betting Championship was won by Rick “I-65” Broth and Anthony “Doczilla” Trezza. Broth had three wins and two places. Trezza went feast or famine and had four wins but no places. Their successes were slightly ironic, however, for different reasons.

Trezza is an unabashed proponent of the Pick & Pray format…so his participation in this Live game (albeit an All Optional Live game) was a bit out of his comfort zone perhaps. If Broth has a preferred format, we’re not aware of it. However, he has let us know in the past when he feels we’ve chosen a featured tourney race that’s too cheap to have been included. We got a chuckle, therefore, when the race that he selected for his final play (and that ultimately made him a winner) was the 9th at Golden Gate…a $4,000 claimer tin which Rick hit a 15-1 shot. We’re guessing that he simply wanted to save a play for the last tourney race regardless of what kind of race it was.

Cavalieri had three winners (and no runners up) that lit up the toteboard to the tune of 7-1, 15-1 and 11-1, respectively, to earn the $1,500 entry for the mythical-money extravaganza at The Orleans.

Jeff Bussan, meanwhile, had two winners among his four collections.

That got him victory—and a $1,500 entry—in our All Optional Live qualifier to the $100,000 Guaranteed Flo-Cal Faceoff right here at HorseTourneys on February 29-March 1.

The talented handicapper/artist recorded six wins, including tallies in the last two heats, to earn the $1,500 entry plus $500 travel stipend to the NTRA/Fair Grounds NHC Super Qualifier on December 21. Here’s how Zepp achieved her…celebration day:

One of the Sunday offerings was a Last Chance qualifier to next Saturday’s Lone Star Park NHC qualifier.

One Howard Johnson had 28 flavors and all-you-can-eat fried clams on Fridays. Another had 36 homers and 32 stolen bases for the 1987 New York Mets. OUR Howard Johnson had four wins and two places on Sunday to earn a $500 entry to Lone Star this coming Saturday. Joining HoJo there will be runner up Michael Schalewski (2 wins, 2 places).

Sunday’s $1,000 Guaranteed Exacta tourney drew a small but select field of nine that was ultimately topped by Tony Calabrese.

Tony connected on three smallish exactas early on, then salted things away with a $73.10-for-$1.00 hit in the 8th at Golden Gate to walk off with the $700 first prize.

Our $8 Pick Six Jackpot game wound up having three winners that were 5-1 or less, and three that were 12-1 or more. 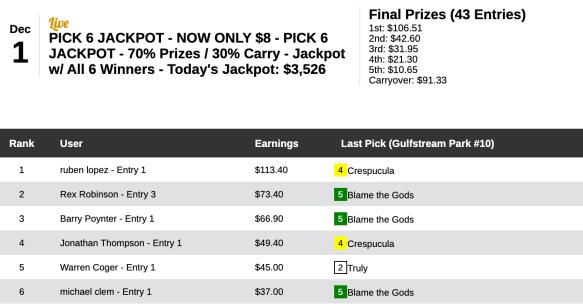 Ruben Lopez had the three that were 12-1 or more and none of the shorter three. That effort easily got him first place, though. Since no one went six-for-six, next week’s Jackpot will be $3,617.

We mentioned that 2018 NHC Champ Chris Littlemore won the right on Friday to take a shot at a second NHC title. On Sunday, over at HorsePlayers, Littlemore’s predecessor—and fellow Canadian—did the same thing.

Here it was 2017 Champ Ray Arsenault (3 wins, 3 places) who secured a “Bally’s Berth” and a chance at history for leading the way in Sunday’s “regular” two-seat qualifier. Joining Ray in Vegas will be runner up William D. Kenney Jr., whose four-win, three-place day, included cashes in the final four races…the last three of which were all winners.

A North Carolina resident, Anthony Laurino doesn’t get to enjoy a whole lot of Parimutuel fun in the Tarheel state. That’s where HorsePlayers comes in!

Laurino was ready for his close-up when Smooth Like Strait ($33.20, $16.20) captured the Cecil B. DeMille Stakes at Del Mar. He added another winner plus three places to that victory, and that made Laurino one of the lucky ones to have already locked up his spot in the 2020 Breeders’ Cup Betting Challenge.

We hope you all enjoyed your Thanksgiving weekend regardless of how you fared in our tourneys. We appreciate you taking the opportunity—despite some inclement weather…and the time rightfully spent with family—to share at least a little part of it with us.

The long-range forecasts look more promising next weekend when Cigar Mile Day (and Claiming Crown Day) will be upon us. Hope to see you again then!