It was another big weekend at HorseTourneys. No fewer than 23 seats to important, onsite contests were awarded over the space of about 28 hours. Meanwhile, on the cash front, $33,000 was earned by HorseTourneys players and that was just counting our featured tourneys.

Before we zero in on all the excitement within our site, however, we want to lead things off by recognizing the tremendous weekend exploits of Eric Moomey, who won Saturday’s The Stronach Group Ultimate Betting Challenge, after qualifying for the event (twice) at HorseTourneys. 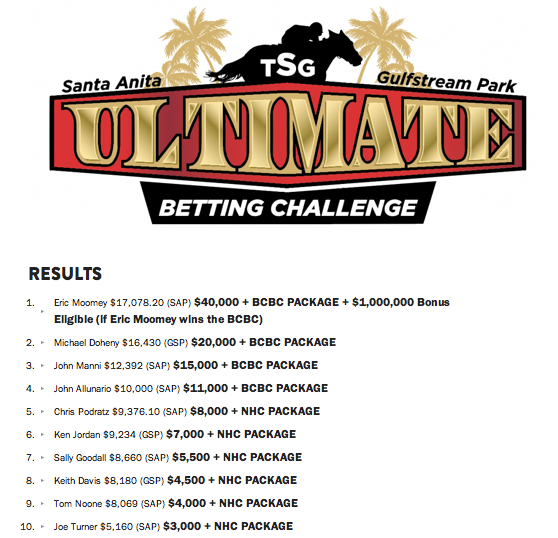 Widely renouned as one of the nation’s finest tournament players, Moomey grew his starting live bankroll to $17,048.20—good for first place and the $40,000 first-place cash bonus that went along with it. Moomey also won a full, $10,000 seat to this year’s Breeders’ Cup Betting Challenge and, perhaps even more exciting, should Moomey win the BCBC, he will earn a $1 million bonus in addition to his BCBC earnings. That’s quite a Saturday’s work, and it all started with an innocent-enough looking triumph in a HorseTourneys qualifier on February 11. Congratulations, Eric, and thank you for representing HorseTourneys with such distinction.

Closer to home (if there is such a thing as “home” within the realm of cyberspace), it was a Pick & Pray weekend here at HorseTourneys and based on all the multiple winners in recent weeks—even during Live-Format weekends—it seemed like a safe bet that we would again see several people chalk up multiple victories.

It didn’t quite work out that way. No one finished first in more than one featured tourney, so the big prizes were well distributed. One player did turn one set of picks into two important brick-and-mortar seats by finishing first in one contest and second in another.

Richie Bennett’s Pick & Pray selections were on target on Sunday. His score of $141.20 was good for first place in our Wynn Handicapping Challenge qualifier, and that same score got him second behind Peter Osella—but good for a seat, nonetheless, in next month’s Keeneland Grade One Gamble. That’s a total of $5,000 in entry fees plus $500 for travel in all.

Getting back to our Wynn qualifier, we had a second seat winner in David Snyder, despite the fact that we attracted 38 entries in a contest that advertised one prize per 20 entries. As long as we reach our minimum amount of entries needed to make a tourney go in the first place (posted clearly on the home page), we will award a second seat (or a third…or a fourth…) as long as we reach that minimum within the second “round” of entries.

With the Wynn qualifier, it was a one per 20 event but we needed 17 entries for the contest to take place.

That meant that a second price would be awarded once we reached 37 entries (20 + 17), not 40. It cuts into our profits a little bit, but we think it’s a player-friendly policy in the long run. In this case, Snyder was the beneficiary.

Our most popular tourney, not surprisingly, was our NHC qualifier, and four more HorseTourneys players punched their tickets to Treasure Island, led by Robert Reidy. 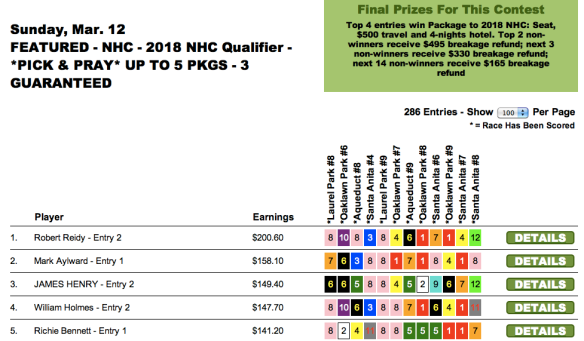 Reidy cracked the $200 barrier by picking four winners that paid $27 or more to win. Fortunately for Mark Aylward, James Henry, and William Holmes, this was a four-seat contest. And, of course, a home run counts the same whether it’s crushed out of the ballpark or barely eludes the outfielder’s glove. So Reidy, Aylward, Henry and Holmes are all on to the NHC! And in this particular game, Richie Bennett’s $141.20 score wound up being caught on the warning track.

Other high-end qualifier winners were Robert Gilbert who became the 10th to win an all-inclusive package to September’s The BIG One at Laurel, and Michael Goodrich who won a lucrative, all-inclusive seat at the Kentucky Derby Betting Championship.

Saturday’s Monmouth Pick Your Prize qualifier was a hard-fought affair that came down to the last race.

By correctly selecting Young Perfection ($20.40 to win, $10.00 to place) in the 13th at Gulfstream, Gary Wright and Joe Scanio leapfrogged those ahead of them to claim the two packages on offer.

The Horse Player World Series is now less than three weeks away, and HorseTourneys was delighted to award eight seats this weekend—three full packages on Saturday and five entries on Sunday.

Our Saturday full-package qualifier, with three prizes available, was a real nail biter. Behind winner Peter Peltier, judges had to call for a print to determine the results of a three-way photo with the 2nd, 3rd and 4th separated by only 20 cents. The results of the photograph showed Cara Yarusso as the second winner by a 20-cent nostril and a dead heat for third. What drama in a three-prize tourney!

Because the dead heat for third was between John O’Neil and John O’Neil. The two O’Neil entries had the exact same score. So no coin toss was needed. Though it is perhaps interesting to point out that his two entries did not have identical selections. O’Neil used two different horses in the first race of the tourney (losing with both) then chose the same horse in the remaining 11 races. Of course, even had O’Neil picked a winner or runner up in that opening race with one of his two picks, the HPWS package winners would have been the same (the order of the top three would have changed…but that’s it). 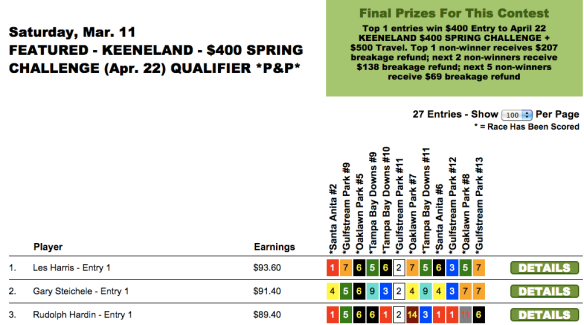 Sunday’s Hawthorne Spring NHC qualifier, meanwhile, was won by Joe Kasperski and Luke Peltz. Both will have $400 entries in play for each day of the separate one-day tourneys on March 24-25 in the Land of Lincoln. Your last chance to qualify for Hawthorne is this weekend.

Tomas Johnson was the $3,000 winner over Richard Grose in our $6,500 Guaranteed Friday game. Please be advised that, due to your strong support, the purse for this Friday’s game has been bumped up to $7,500. If you plan on playing and are hoping for some extra luck, you are advised to wear green. This Friday is St. Patrick’s Day. 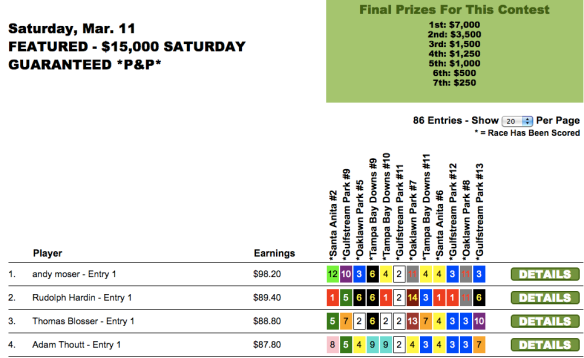 Sunday’s newly-enhanced $10,000 game went to Peter Rogers ($5,000), who edged out Kenneth Jordan ($2,500) by just 30 cents. (Jordan was knocking on the door of several tourneys all weekend long, including the TSG Ultimate Betting Championship where he finished a fine 6th behind Moomey–good for an NHC seat and more than $16,000). It was only another 50 cents back to Thomas Baugh ($1,250) in 3rd. Rogers and Jordan each had the $8.00 place horse in the contest finale to squeeze past Baugh.

For this first time in a long time, this featured guaranteed Exacta game went off as an overlay to the players. Something to file away, perhaps, for next weekend.

As you can see, it was an exceedingly busy, but exceedingly fun weekend for us. We hope it was for you as well. Thanks for playing.